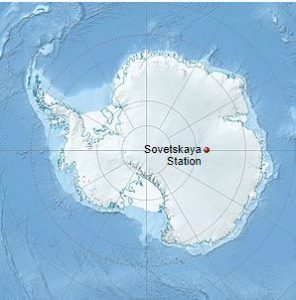 Sovetskaya , 77° 58’ South, 89° 16 East was a Soviet research station in  Kaiser Wilhelm Land in Antarctica that was established on 16 February 1958 by the 3rd  Soviet Antarctic Expedition  on International Geophisic Year research work, and closed on 3 January 1959.

Antarctic Comrades (An American with the Russians in Antarctica) is  a book written by  Gilbert Dewart (https://core.ac.uk/download/pdf/159608932.pdf) . On it, Gilbert Dewart reports about a Sovietskaya Refuge (or Base) Here some paragraphs. We, have just add the WAP References for the sites mentioned:

… Another trail party left Mirnyy (WAP RUS-Ø7) that December: it took more fuel and supplies to Vostok, then returned to Komsomolskaya (WAP RUS-Ø5) and set out from there on a new heading in pursuit of the distant 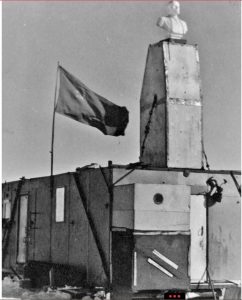 Pole of inaccessibility  (WAP RUS-NEW) –see pic aside to the right-.

Again the going was very tough, and with the season becoming dangerously late, the party pulled up at an intermediate spot on February 16, 1958, and opened Sovetskaya Station 11,700 feet above the sea. Though this position was unplanned, it was near enough to the goal, and for the scientific purpose of studying the extreme interior of the polar ice sheet it would serve as well. Six men wintered here under the leadership of V. K. Babarykin. Sovetskaya and Vostok stations both set new world records for low temperatures that winter, the final extreme minimum being-87.4° C (-125° F) at Vostok, so the Russians could now claim the “Pole of Cold.” With the three stations established on the ice plateau, plus Mirnyy, Pionerskaya, and Oazis, they now had six permanent bases in Antarctica for the second phase of the IGY in 1958. The Third Expedition, commanded by Ye. I. Tolstikov, operated this array of scientific stations. 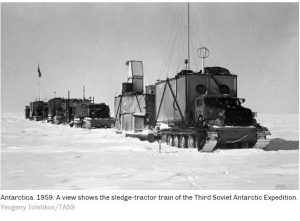 The site was occupied for only two weeks, until the official end of the IGY, then abandoned, though the shelters and basic equipment were left intact for future use.

With the Fourth Expedition, directed by A. G. Dralkin, the Soviet Antarctic Program underwent retrenchment and a change in focus. The personnel complement was reduced from 185 to 113 men, and Sovetskaya (WAP RUS-NEW), Pionerskaya (WAP RUS-10), and Oazis (WAP RUS-NEW) were closed down in January

1959 (Oazis station was turned over to a small Polish contingent, but the Russo-Polish relationship proved acrimonious, and the Poles soon abandoned it).

Komsomolskaya was converted to seasonal use as a weather station and logistical support base for air operations in the summer. On the other hand, two thousand miles to the west, on the coast of Queen Maud Land, a landing party from the Ob established a new permanent station which was named, with history in mind again, for M. P. Lazarev, Bellingshausen’s second-in-command. Lazarev Station (WAP RUS-NEW) was intended as the base for an investigation of a nearby ice shelf and for an ambitious geological exploration program in a range of little-known mountains a short distance inland.

WAP have no evidence of any Hams that did ever operate HF from Sovetskaya Base, Lazarev and Oazis.
Thanks and credit to: Одинокий и холодный Ленин на «Полюсе недоступности» (фотогалерея) (rferl.org)