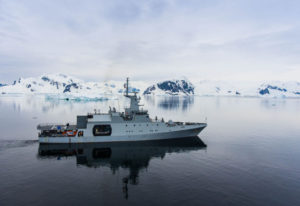 Colombia plans to set up its base at a point along the Gerlache Strait, a body of water 100 miles long and 20 miles wide that separates the Palmer Archipelago from the Danco Coast on the western side of the Antarctic Peninsula.

Brazil, Chile, Ecuador, Peru, and the United States already have bases in that area.

Colombian Navy (Armada Nacional) will test icy waters after announcing plans to establish a naval base on Antarctica; five to 10 years is the allocated time frame for Colombia to establish a permanent presence on the icy continent with a base that will be shared with international scientists to monitor the effects of climate change.

The strategic objective is part of the Navy’s Colombia Antarctic Program (PAC), operational for more than three decades, and which is currently conducting the 4th  Scientific Expedition with researchers on board the ARC “20 de Julio”. Colombia makes it once a year to Antarctica with its own ships, an accomplishment only four nations in the world have achieved.

As a member nation of the Antarctic Treaty, the ARC “20 de Julio” has invited naval officers from Mexico, Spain, Peru, Ecuador, Argentina and New Zealand to work alongside them, as well as a team of Colombian scientists researching this remote continent’s biology, oceanography and geology. The ARC “20 de Julio” is a fully-equipped ship for both military and scientific operations. A helicopter does photogrammetric mapping and zodiacs collect cold-water samples.