Refuge Cristo Redentor is an Antarctic refuge located at 63°33′ South, 57°22′ West at the western access to Duse Bay in the Trinity Peninsula, 25 kilometres (16 mi) from Esperanza Base (WAP  ARG-Ø4). It is administered by the Argentine Army and was inaugurated on May 25, 1955. 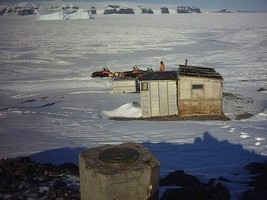 The Refuge, is one of the 18 shelters that are under the responsibility of Esperanza, which is responsible for the maintenance and the care. It has capacity for 12 people, food for two months, fuel, gas and first aid kit. It has been used in some Argentine scientific campaigns and ordinary patrolling. The main scientific observations are the geology and topography of the area, the sea ice and survey on the Crabeater seal and the Weddel seal.

Between September 1956 and January 1957, the assistant Sergeant Domingo Avila and Sergeant Telmo Buonomo, officiating as commissioners in the refuge area, were isolated by an early melting of the sea in the Duse Bay. They survived four months until were rescued by ARA General San Martìn icebreaker’s helicopter.