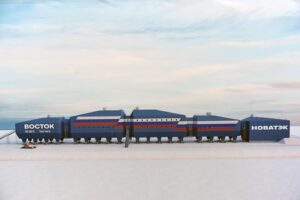 Reconstruction of the Vostok II Station,  the only inland Antarctic station used by Russia,  is scheduled to be completed by 2024.

“At present, work is being completed on the design of residential modules with working rooms for laboratories, engineering modules and a garage, which will be manufactured and delivered to St. Petersburg at the expense of private funds. In the future, at the expense of federal funds, the modules will be delivered to the Progress station, and from there,  across the territory of Antarctica to the destination for assembly. The last section of the route will be about 1500 kilometers and will be covered by a sledge-caterpillar train. This is the only way to reach the station by land – nine months a year it is cut off from the rest of the world ” commented Sergei Khrushchev, Director of the Department of State Policy and Regulation in Hydrometeorology, Arctic, Antarctic and World Ocean Studies of the Russian Ministry of Natural Resources .

Recall that the first experimental flight to the station took place in 2019. As a result, the specialists completed the revision of the sled, which will deliver the component parts of modules weighing up to 60 tons.

The delivery of fuel to Progress and the compaction of the site for the placement of facilities at the Vostok station is in full swing. After its reconstruction on an area of ​​2500 square meters.  will accommodate residential modules, laboratories, a medical unit, a power plant, garages for equipment. In the Antarctic summer, 35 people will work at the station, 15 will remain for the winter.

The 65th seasonal expedition is currently underway. It involves 110 winterers who spend about a year in Antarctica and 120 seasonal employees. The scientific expedition vessels “Akademik Treshnikov” and “Akademik Fedorov”, as well as the research vessel “Akademik Alexander Karpinsky” are involved in the work. 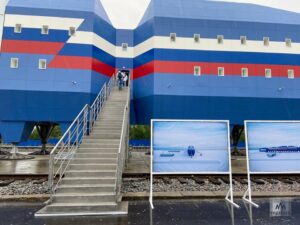 In addition, it is reported that, last Jan. the snow surface at the site was being compacted to accommodate the future facilities & fuel loads were being delivered in advance at the coastal Base Progress II (WAP RUS-11). With a post on FB, Alexey Loginov informs   that new building of Vostok II station is ready for transportation to Antarctica!

The project of the new station was performed by a  German company, while bilders are from Novatec company (specialized on LNG at Arctica), and all constructions will reach Antarctica this season. All material  load on Polar ships will land at Progress II Base (WAP RUS-11), then  will be transported on site by huge sledge with over 1000 km traverse

A training of аssembly will be performed in St. Petersburg, then the building will be disassembled, loaded on ship, heading the Antarctic coast, pre-assembled blocks will move on a huge sled.

The Polar Ship Sevmorput, the world’s only nuclear-powered cargo ship, is currently preparing for a voyage to Antarctica to supply the new Russia’s Vostok II Research station.
When ready, the Antarctic hunters will be looking forward a Radio contact on HF as for sure, the New Vostok Station (Vostok II) will be a brand NEW WAP WADA  reference.