John Landrigan KA4RXP is planning the ultimate of all cruises; leaving New Zealand on Feb 8, 2018 going to McMurdo Station on the Ross Sea and returning on March 8 ; he will join the 15th Antarctic Activity Week. 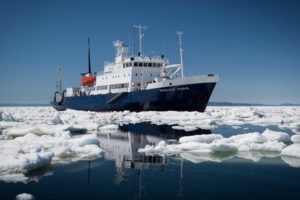 John wrote: -The 50-passenger M/V Spirit of Enderby is described as an ‘intimate’ exploration vessel with a reinforced hull. It apparently is pretty cramped and the bathroom is down the hall. The Captain and crew are Russian and I was advised to bring a potent surge protector .

I have the Company’s permission to operate and they are going to allow me unrestricted access to the former Radio Room on the ship so that I can set up my Yaesu 897 and Pactor modem.

I’m going to pay for them to install a used, I hope, marine HF antenna.  I’ll bring an antenna of a type and brand to be determined.

The ship’s generator is subject to severe fluctuations due to lights and equipment being turned on and off. I need suggestions for 220 volt surge protection/Uninterruptible power supply devices to protect my radio and computer equipment. I don’t know how frequently they blow light bulbs but it sounds like a potent damping system may be required.

I am thinking the experts at this are probably in Invercargill, New Zealand where the ship departs from. I know that propagation is inversely proportional to one’s distance from the North or South Pole. I am thinking that a HF vertical and tuner would be significantly better than just my magnetically mounted Little Tarheel Screwdriver.

What about some type of dipole as you often see on models and photos of old ships with a wire going from bow to stern masts?  The ship’s manager did say I would need about 100 feet of coax from the antenna to the Radio Room. I am wondering if they were thinking of stringing up that type of antenna and running coax down a mast to the Radio Room.

Anyone with marine HF experience is earnestly solicited to respond (ka4rxp@gmail.com )

This cruise will be right at the time of the 15th Antarctic Activity Week and John KA4RXP/MM will be the first to operate maritime mobile during an AAW ! He will be on 40 through 10 meters if propagation will permit.John sais.