Despite the current situation, the Czech Antarctic Research Program will continue with field research. An eight-member team has departed  from Prague on Wednesday, December 16th to Chile, where they will quarantine at a hotel, before heading on to Johann Gregor Mendel Station (WAP CZE-NEW) on James Ross Island in Antarctica

The eight-members of Czech scientists begin an expedition to the Antarctic. In early January, the team should arrive at the research station  (Pic aside) off the east coast of the Antarctic Peninsula. The aim is to examine the long-term impact of climate change on the outskirts of Antarctica. 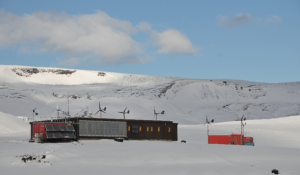 The expedition will be led by climatologist and polar explorer Kamil Láska from the Department of Geography, at Masaryk University’s Faculty of Science. The operation of the station will be overseen by technicians from Czechoslovak Ocean Shipping, František Vorel and Tomáš Spáčil.

The team will collect data from about 20 weather stations in the vicinity of the base and return with the data and collected samples for further research. The team is expected to return in March. However, on their previous expedition this Spring, their return was delayed by a month due to disruption caused by the coronavirus pandemic.

The Hamradio world, is looking for some HF operations on the bands  and in this case,  a brand new WAP reference will be issued…. Scientists, do not forget the importance of Ham radio activity which could enter into your technical studies!
More about Johann Gregor Mendel Scientific Station (WAP CZE-NEW) can be found at: http://antarcticfoundation.cz/en/czech-antarctic-station/