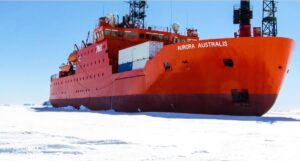 The 312-foot orange icebreaker has been replaced by another giant vessel and the scientists are now planning to refurbish the ship, according to Associated Press. Aurora Australis started conducting maiden voyages in September 1989, after its launch from NSW shipyard, north of Sydney and gained popularity after it sailed to Heard Island, an external Australian territory around the year 1990.

Since then, it ferried scientific researchers, transported food supplies and fuel for several expeditions in the Antarctic ocean.