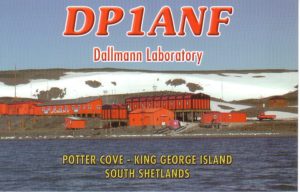 Despite its frigid solitude, at several sites in the Antarctic nations from around the world have joined forces in the name of research: the Argentinian Carlini Station ( ex- Estacion Cientifica T.te Jubany) WAP ARG-20 on King George Island, one of the South Shetland Islands, is a prime example:Different nations, all under one roof,

In 1994 the Alfred Wegener Institute and Instituto Antárctico Argentino founded the first research institute operated by more than one nation – the Dallmann Laboratory  (WAP MNB-Ø4), where researchers from Argentina, the Netherlands and Germany work together under the same roof from October to April (the Antarctic summer). Here, up to 14 researchers at a time pursue biological and geo-scientific field research in the ice-free regions and the shallow waters near the coast – which is only possible in a handful of locations in the Antarctic.

The Laboratory was named in honour of the polar explorer and Bremen native Eduard Dallmann, who headed the first German exploration of the Antarctic, or more precisely, of the Antarctic Peninsula, in 1873.

The video below (without sound) shows the work of scientists at the station:

The only station active so far from Dallman Laboratory (WAP MNB-Ø4) has been Oleg Sakharov R1ANF-UA1PBA  who did operate DP1ANF in the month of March, 2004. (QSL for DP1ANF via RK1PWA)