China plans to build its fifth Research Station in the Antarctic in a bid to further promote polar research, said an official with the State Oceanic Administration (SOA). 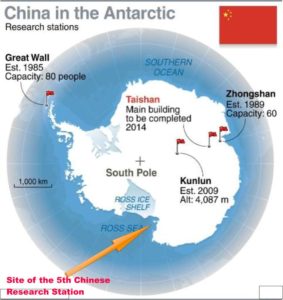 The station will be set on Inexpressible Island in Terra Nova Bay in the Ross Sea. After it is built, the year-round base will be used to investigate the land, sea, atmosphere, and glaciers in the Antarctic.  Chinese icebreaker ‘Xuelong is bound for Antarctica with construction materials in tow to build the country’s fifth scientific research station on the continent.

Read more at: http://news.xinhuanet.com/english/2017-10/28/c_136711670.htm
I/B Xuelong  started off at Inexpressible Island, not far from the Italian Mario Zucchelli Station (WAP ITA-Ø1), where the construction of the third all year round open Chinese station, is scheduled for 2022.  The name of this planned “New Base” is not yet known.

On the mean time, China is building its first homemade polar icebreaker “Xuelong 2” which is expected to be completed in 2019. Scientists say it will provide a solid guarantee for China’s polar expeditions.