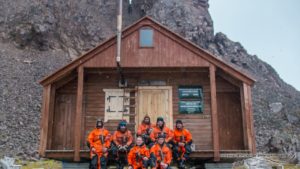 Located on ASPA 128, Demay refuge (wood hut) 62°13’ South,    58°26’30” West,   is situated on a flat marine gravel terrace in Paradise Cove between Demay Point and Uchatka Point. The refuge can be reached both by Zodiac and by foot.

How does the paradise look like? This question can be answered by the station crew, in particular by those involved in the environmental monitoring. A little Paradise Cove is located about 10 km from Arctowski Station (WAP POL-Ø1), within the Antarctic Specially Protected Area ASPA-128. In there, there is a little cottage above whose door there is a sign ‘RAJ’ “Polish for Paradise”. The refuge provides shelter during the regular trek along the SW shores of Admiralty Bay when we count pinniped mammals. Over the years lots of people stayed in the cottage: glaciologists working at the Windy and Tower Glaciers, geologists studying rock formations at Red Hill, Baszta and Bastion Hills, so called  “debris guys” measuring outflow from the Baranowski Glacier and collecting bedload… 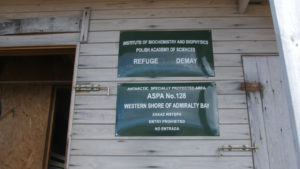 Their memories are preserved in the cottage guest book. The refuge contains two bunk beds, gas cooker, stove and even a shower. There is a VHF radio available with antenna on the rocks above the refuge. It is perfect for hiding from the cold, wind, blizzard and heavy rain. Those who stayed in the Paradise overnight can confirm that few earthy pleasures compare to a dawn on the veranda with a warm cup of tea in hands and a view over a calm horizon decorated with icebergs, waves breaking against the rocks of Demay Head, sleepy elephant seals and playful furseals.

So far, no one has been operate Ham Radio from there and we strongly expect some of the polish friends to be active on the HF bands to give all of the Antarctic chasers, a great chance to work a brand new Antarctic Hut!