We have already came across the Huts at the Sub-Antarctic  Macquarie Island (WAP AUS-Ø8), on last april 2019, see: http://www.waponline.it/a-quick-tour-among-the-huts-at-macquarie-island/.

Today we’ll have a brief tour through the historical Huts on the same island: 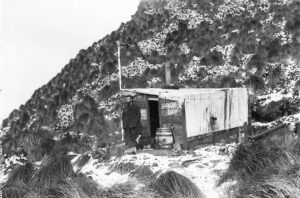 Historic Old Sandy Bay Hut Everyone on the island, and all the tourists who visit, are familiar with the little old field hut at Sandy Bay. It is solid as a rock and banded with rusty iron, tussocks grow on top and roosting skuas keep watch over the surrounding king penguin colony. It is a picturesque sight.

The door bolt is rusted shut, but expeditioners can peer in the grubby window at a dark, decrepit interior festooned with penguin-moult feathers caught up in spider webs – very atmospheric. Feathers from moulting penguins can be found everywhere, as we know from doing our weekly communal clean-up duties. It is amazing how they can sneak through the tiniest crevices in buildings.

Other Huts at Macquarie Island

Huts and try works were located at the Isthmus, Sandy Bay, Lusitania Bay, Caroline Cove and Hurd Point. Russian explorer Thaddeus Bellingshausen visited Macquarie Island in 1820 and reported that a total of 40 men were working on the island. He also left an interesting description of the sealers hut at Sandy Bay which was:

20 feet long by 10 feet broad, inside it was lined with skins of seals, the outside was covered with a kind of grass which grows on the island. At one end was a small hearth, and a lamp was always kept alight. … Beside the hearth was a bedstead. Provisions were stored at the other end of the hut. Inside it was so black and dark from the smoke that the smouldering light from the lamp and from the holes in the wall over which bladders were stretched, scarcely lit the interior of the hut, and until we got accustomed to the light the sealers had to lead us by the hand.

Let’s have a look to the others removed Huts:

With the long awaited recognition that Macquarie Island was cat free this last season, there was no longer any justification for the presence of the three plateau Field Huts that  had been established some years ago to provide accommodation for the Tasmanian Parks and Wildlife staff involved in the cat eradication project, part of the Vertebrate Pest Management Program:

Another Hut was established at Davis Point in 1993 for the purpose of conducting the marine debris survey.

Davis Point Hut (54° 39.9′ South, 158° 49.5′ East) There is a small hut at Davis Point (pic aside) used for special fieldwork and as a refuge, which catches rain water off the roof. Davis Point hut is a cross country transit to Green Gorge Hut

The Davis Point Hut is one of seven shelters dropped across the island for hunters and their dogs tracking rabbits. They were a vital part of the Macquarie Island eradication of pests.

As this work will now be centered on Bauer Bay, there was no longer any need for this hut to remain on the island. Mt Eitel apple hut packed up. Rat-proof cage pallet in foreground. March 2003

When the ship arrived at the end of March, the helicopters were deployed to lift both the Davis Point Hut and the three apple huts from the plateau, by cable sling and transport them back to the main station area. Each hut was accompanied by two pre-packed cage pallets, gas bottles and a black rat-proof cage pallet with perishable items such as food. It took about three to four hours of work to totally remove each of the apple huts and their contents.

All four huts were then transported by helicopter from the Isthmus to the ship ready for return to Australia. 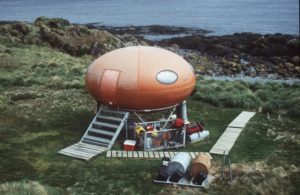 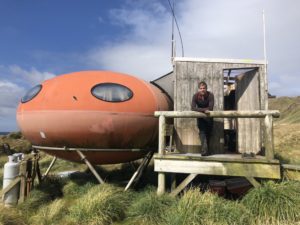 Thanks and credit to the following web sites: