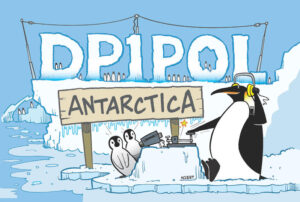 Organizing an Antarctic expedition in the times of COVID19 is quite a challenge, so the German Polar Institute (AWI) had to find a different approach to the logistics for the upcoming Antarctic summer season. All transports will be carried out by ship directly from Germany. There is only a small team of about 20 technicians and scientists travelling to Neumayer III  Station (WAP DEU-Ø8), this year. YL Theresa,  DC1TH and Felix, DL5XL will be part of that group.

During the voyage, from December 20 for about one month, Felix will operate as DPØPOL/MM from the Icebreaker R/V Polarstern, mainly in CW and digital modes.

From mid-January to mid-March 2021, DL5XL expects to be active from the research station “Neumayer III” signing DP1POL. More information about Neumayer Station III,  are available at the station’s official web site

The Ham station in Antarctica is equipped for HF and QO-100 satellite. Club call DPØGVN may also be used at times by other operators.

QSL cards for DP1POL will be handled by Ray DL1ZBO (direct, bureau or LotW for all call signs). 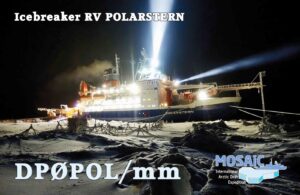 WAP wish good luck  to the whole crew on the way to Antarctica, hope to catch you on the air!

About the recent DPØPOL/MM operation from the Arctic, DL5EBE says:
QSLs for QSOs made with DPØPOL/mm icebreaker R/V POLARSTERN during the MOSAIC International Arctic Drift Expedition are printed. Requests received will be answered the same way as they came in.