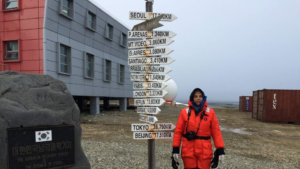 In a recent mail (April 2 2021) Lee Sang Hon (DS4MNJ) informs that antenna for 80m~10m is installed and now he is ready for FT8 and CW. SSB is possible but it is only for contest or request.

Several spots have been put on the Cluster, so it’s a good time to stay tuned! Lee  has promised to send WAP some pictures and stories.

The King Sejong Station (WAP KOR-Ø1) was established and inaugurated on King George Island in February 1988.

The return journey of  R/V

Polarstern from Stanley on the Falkland Islands to the home port of Bremerhaven begins last, Friday, April 2,
2021. The German research icebreaker is expected to arrive there on April 29th.
The current Polarstern voyage has the official abbreviation PS 125. On the Falkland Islands there has been an extensive change of crew and scientists. In order to achieve a safe exchange with regard to the pandemic situation, all new crew members from Germany as well as the representative of the Alfred Wegener Institute for Polar Research (AW) and two employees of the German Weather Service (DWD) were previously in a two-week quarantine. 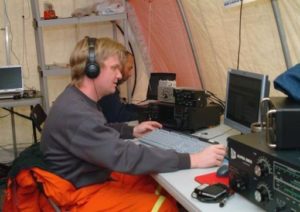 Among them is Felix, DL5XL, who has been very active on the bands in the past few months under DP0GNV from the Neumayer III Research Station (WAP DEU-Ø8)  and under DP0POL/MM from on board the Polarstern. Together with Theresa, DC1TH, he made it possible for many radio amateurs to have very special radio contact via QO-100 or on shortwave in his limited free time; we reported several times.
Addendum: Polarstern started its voyage to Europe on Friday evening at 1849 UTC. On the night of April 3, DP0POL/MM was already active again in the 40 m band in CW. Radio amateur on board is Andreas, DL3LRM.
Read more at: https://www.funkamateur.de/nachrichtendetails/items/PS125.html
TNX Info AWI and DL1AX