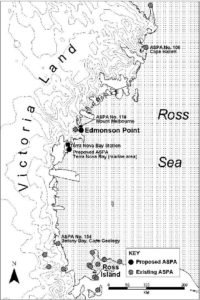 Located at 74°20’South, 165°08’ East,  Edmonson Point is a rounded, largely ice-free point lying below Mount Melbourne along the west side of Wood bay, Victoria land.
It was mapped by the US Geological Survey from surveys and from US Navy air photographs, in the years 1955–63, and was named by the Advisoy Committee on Antarctic names for Larry Edmonson, a satellite geodesy scientist at McMurdo, winter party 1966.

The point has been designated an Antarctic Specially Protected Area (ASPA 165) because of its terrestrial and freshwater ecosystem. The volcanic lithology and substrates are nutrient-enriched by colonies of Adelie peng 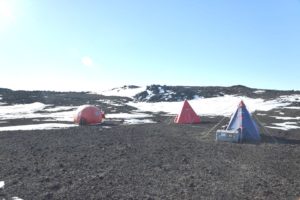 In December 1985, during the first Italian Antarctic expedition, the Italian party placed the first Italian remote camp (few tents) over the hills overlooking the Terra Nova Bay, looking for the best place to build a new station (named after “Mario Zucchelli” WAP ITA-Ø1). The first automatic weather station (AWS) called Eneide was installed at the top of an hill by Andrea Pellegrini; the place was called Campo Meteo.