Vernadsky Research Base (WAP UKR-Ø1), the only Ukrainian station in Antarctica, is located on Galindez Island in the Bellingshausen Sea, close to the Antarctic Peninsula, some 2,700 kilometers away from the South Pole.

Ukraine is one of the 30 countries in the world, which has its permanent station in Antarctica, which operates all year round. A team of 26 Ukrainian biologists, geologists, and engineers is to spend more than two months conducting important scientific research, according to the National Antarctic Scientific Center , the Ukrainian public body formed in 1993, responsible for coordination, managing and executing Ukrainian activities in Antarctica.. 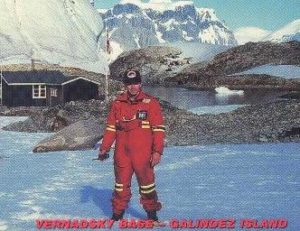 , is among the Team actually  travelling to reach Vernadsky Base, Galindez Island; Ronan will operate on HF Bands on his spare time, signing EM1UA and EM1U .

According to Pavlo UT1KY (a Ukrainian Antarctic veteran), it will take 2-3 weeks to reach the site, so we do not expect to hear Ronan before the beginning of February. The license issued, will expire 1st February 2020.

In 1996 the British Faraday Station (WAP GBR-Ø6) was transferred to the members of the 1st Ukrainian Antarctic Expedition and then renamed to the Akademik Vernadsky Station which is capable of supporting complex and systematic scientific research in Antarctica.