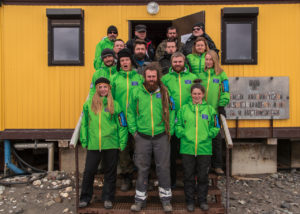 Being an electronic specialist, Seba did work at Lions Rump Refuge (30 km away) to build communication stuff to link Arctowski main station. He sets the mast with antenna at the highest site using all of RG 213 cable available  then,  he realized that he could not connect his delta mini to the transceiver, without feeder.

The problem was solved by the help of Juan Manuel LU4CJM who was at that time operating at Carlini Base.

Seba wrote:– I visited Carlini Station  (WAP ARG-2Ø) a couple of times (7 hours by walk through Warsaw glacier). Juan Manuel  was a radio engineer there; he gave me a skein of 50 meters RG 213 and … I took it back across the glacier on my backpack. At my return, I immediately start to complete the job …cut, weld, measuring, test,  etc. 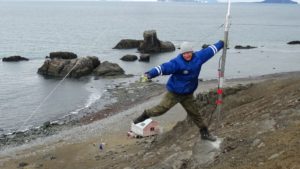 After a couple weeks all was ready. All wintering crew did help me to set the hardware, mast and antennas . It was very hard; we had to pull the top and put something under the center  with risk of collapse, then we attached the lashings. It was a long day but at the end, the new mast with my delta mini was on, with a good SWR. 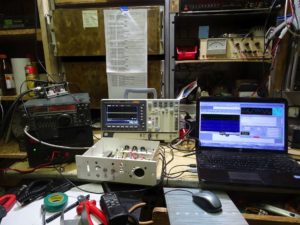 At the beginning, for two weeks  I could not find propagation window (only 3 QSO’s ), so I decided to build a converter for digital modes. It did  take me around one month. I make separation trafo from old analog phone, another one from a network card and  on july 15,2017 I was on air (pics aside: the digital converter while in assembly). On JT65 and FT8 I make a lots of QSO, as well as on SSB.

During my time on the air I make a  QSO with SP3BGD, electronic engineer (and Ham radio) who did operate from Arctowski in 1998. It was a very nice QSO with lots warm words.
Last QSO in my log was on  15.oct,2017. Then my chief  from Warsaw told me to put down the mast… I secured it  on the hall… maybe I will come back one day?

Two weeks later I was in Ushuaia, then finally at home!.

Henryk Arctowski Polish Antarctic Station (WAP POL-Ø1), is located on King George Island in the South Shetland archipelago and it has been operating since the late 1970s.

It remain the hope that really some days both remote refuges: Lion’s Rump Refuge  (WAP POL-NEW) Pic on the Left 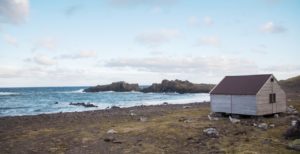 and Demay Point Refuge (WAP POL-NEW) Pic on the Right, could be on the air and a new reference be issued! It will be a great goal for Polish Hams and for the entire Ham radio WW Antarctic hunters community!