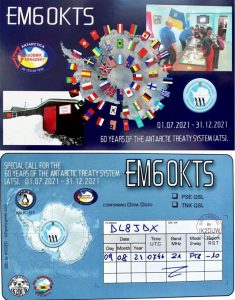 Pavlo is always very active and he couldn’t miss to join  the 6Ø Years of the Antarctic Treaty System (ATS). Ukraina is joining the Anniversary , (TNX Pavlo) with the Special Call EM6ØKTS (WAP-319)  on the air from  july 1st 2021  through  december 31st 2021
QSL via IK2DUW

Congrats to Volker Strecke DL8JDX  (another Antarctic veteran ) for sending us  the QSL for the contact he made with EM6ØKTS.

.
All the special event stations joining the 6Ø Anniversary of the Antarctic Treaty, have received  a WAP reference number which can be used for the WAP-WACA & WAP WADA Awards. In addition, everyone can apply for the several  Awardss issued  for the 6ØATS event.