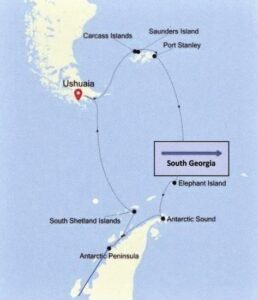 The voyage of the National Geographic Orion from February 16, to March 7, 2016, followed the map counterclockwise. The purpose of the trip was exploration of the Antarctic Peninsula by ship and on land, and commemoration of the 100th anniversary of Earnest Shackleton’s near disastrous voyage to Antarctica and ultimate rescue, 1914 — 1917.

Orion reached 67.2°South along the Antarctic Peninsula. The ship then travelled to Elephant Island where Shackleton and crew arrived by dinghies following the wreck of their ship Endeavour in pack ice. The crew remained there for 137 days while Shackleton and S others sailed 800 miles (1300km) to South Georgia in a dinghy. He and a crew member hiked without maps for 2 days across glaciers to reach Stromness and arranged for rescue of the crew. Remarkably, no one was lost. Our voyagers hiked a long portion of Shackleton’s trek and visited his grave at Grytviken.

Buzz  W3EMD (VP8DPC/MM and C6AMD/MM)said:   «C6AMD/MM was used for our Bahamas registered ship in international waters; VP8DPC/MM was for operation from the ship at South Georgia and the Falklands. Equipment was Elecraft K3. 100W, CW & SSB and 53ft (16M) end fed wire with 1:9 unun. About 300 QSOs world-wide on 15M – 30M were made operating from the ship’s library just below the antenna deck».

Bob Hines K4MZU is now the QSL manager for this operation