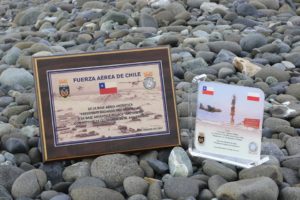 Now that the Antarctic Campaign 2017-2018 is almost open, it’s time to make presentations and get to know the neighbors.

A commemorative plaque for this year’s 40th anniversary of Vernadski Station has been given , with a big surprise,  to the Polish team by the Chilean neighbors of  Base Presidente Eduardo Frei Montalva (WAP CHL-Ø5).

Chile’s independence was officially declared on February 12, 1818, so 2017 marks their  99th anniversary of independence a good way to celebrate both events with 2 joint plaquest on the Antarctic soil. 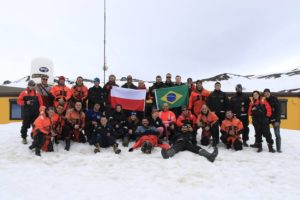 Personnel from Arctowski did get a first meeting with Brazilians  from Comandante Ferraz Station (WAP BRA-Ø2) to mark the good relations of friendship between the two research units in Antarctica.