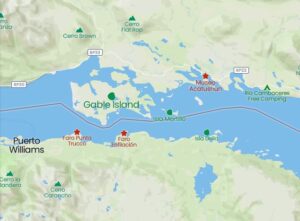 Gable Island (Isla Gable) is an Argentine island belonging to the Ushuaia Department of Tierra del Fuego Province of, Antarctica and the South Atlantic Islands in Argentina.

The island is located on the northern side of east-west Beagle Channel less than 300 metres (980 ft) from Tierra del Fuego island and about 1.5 kilometres (0.93 mi) from Chilean Navarino Island (WAP CHL-13) . The island has an irregular shape with many shoal banks extending into bays and open channel.

It is located at 54° 54′ South, 67° 29′ West, and as an approximate area of 22 km and its population is 50 inhabitants The islands surface is mostly covered by Magallanic forest. 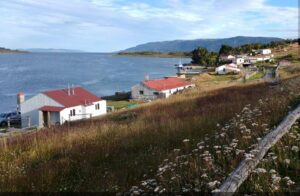 Arbitration of 1977 (followed the one of 1971) awarded the Gable Islands to Argentina and delimited their adjacent waters, but was declared void by this country, although accepted by Chile.

Finally, the 1984 Treaty of Peace and Friendship definitively recognized Argentine sovereignty over these islands.