In 1974 the Antarctic Treaty was signed by East Germany, which reached Consultative Status in 1987. The first permanently operated DDR Research Base,  named Georg Forster Station,  (WAP DEU-Ø1) was established in 1976 in the Schirmacher Oasis at 70°46’ South, 11°41’ East.

On 22 March, 1988, a 35p stamp to commemorate the 12th anniversary of its founding,  was issued by East Germany depicting the Research Station, some distant hills and the Southern Ocean. Below on the stamp, is the inscription Antarktisforschungsstation der DDR “Georg-Forster”. 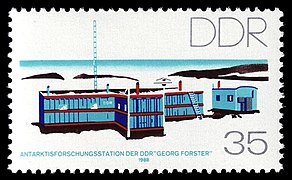 At that time the concept using pre-fabricated container modules for laboratories, power plant and accommodation was pioneering. Altogether eight container modules were carried on sledges from the unloading site at the ice edge of the Lazarev Ice Shelf, over a distance of 120 km into the Schirmacher Oasis and assembled to a Research Base within only six weeks. Since then, the Station was permanently used and operated as an annex to the Russian station Novolazarevskaya until 1987.

Following the German reunification on 3 october 1990, the East German Antarctic Program was absorbed into that of German Federal Republic which maintains the name of the Base as  Georg Forster Station  WAP DEU-Ø3, until 1993 and then dismantled in the frame of a German-Russian project, which was completed in 1996.