The colossus iceberg that split from Antarctica’s Larsen C ice shelf on 12 July 2017 is on a collision course with South Georgia. 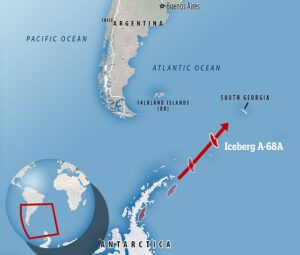 Over the last three years, satellite missions such as Copernicus Sentinel-1 have been used to track the berg as it has drifted in the Southern Ocean. For the first two years, it remained close to its parent ice sheet, impeded by sea ice. But now, as the map shows, the main chunk of the A-68 berg, known as A-68A, is heading rapidly for South Georgia. It is now about 350 km from the island.

About the same size as the South Atlantic island, it could ground in the shallow waters offshore and cause real problems for the island wildlife and seafloor-dwelling life. Penguins and seals need access to the sea to feed so the iceberg could easily block their foraging routes and life on the seafloor could be crushed if the berg grounds. The fear is that if the berg does anchor against the South Georgia coast, it could remain there for up to 10 years. When the A38 grounded here in 2004, many dead penguin chicks and seal pups were found along the shoreline.

Thanks and credit ESA.   Read more at: