Hundreds of diplomas have been already requested and awarded to the Hams all over the world who are partecipating the 60th Antarctic Treaty Anniversary. 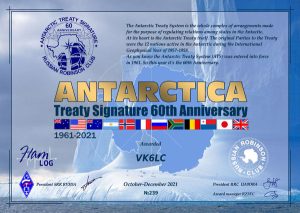 The event launched by WAP is actually followed by thousands of Radioamateurs WW. Congrats to Malcom K. Johnson VK6LC a well known DX-petinionner who is the 1st VK to achieve  both  Basic and the Trophy Antarctica Treaty Signature 60th Anniversary Award’s, issued by  the Russian Robinson Club. 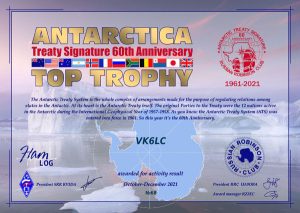 Congrats  also to Volker DL8JDX, Gabry IK1NEG and hundreds more,  for having got his  Awards as well.

WAP reminds the Hams that all these Awards are available on line, and they are totally free.

From the month of november and till the end ofde. 2021, other SESs will join the event and the competition will become more attractive!

Enjoy Antarctica and protect the Icy Continent as much as we do!