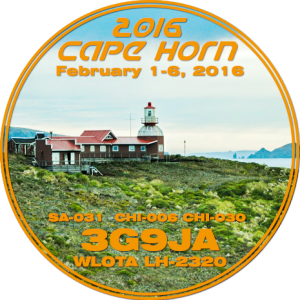 That one, was a Special activation for the “Anniversary of the Discovery of Cape Horn (1616-2016)
The Chilean Navy maintains a station on the island, consisting of a residence, utility building, chapel, and lighthouse. A short distance from the main station is a memorial, including a large sculpture featuring the silhouette of an albatros, in honor of the sailors who died while attempting to “round the Horn”.

The island is one of the Hermite Islands, part of the Tierra del Fuego archipelago. Two lighthouses are located near or in Cape Horn. The one located in the Chilean Navy Station is the more accessible and visited, and is commonly referred to as the Cape Horn lighthouse. However, the Chilean Navy station, including the lighthouse (ARLS CHI-030, 55° 57’ 48” South, 67° 13’ 12” West) and the memorial, are not located on Cape Horn (which is difficult to access 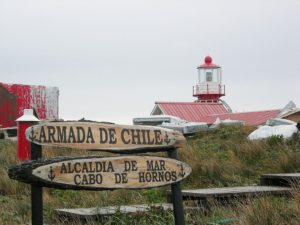 either by land or sea), but on another land point about one mile east-northeast.

A video show some very interesting views of this Island is available by clicking the red button aside.

Before it was a detachment of three Chileans who are part of the Chilean Navy, those who took care of the facilities and gave sovereignty to this mythical point of the world navigation. Now who is in charge of the lighthouse and the weather station is a single military man, who must reside on the island for a year with his family. The island of Hornos can only be reached by private boat, with the Chilean navy or in one of the two cruises that make the route of the Patagonian channels or that travel towards Antarctica.

Let’s hope the Chilean Radio Club or some Chilean operators can do it again in  the near future, Horn Island is always a great DX!