Someone call it “Shackleton Memorial”, others “Frank Wild Memorial” while  HSM (Historical Sites and Monuments) with its official HSM-53 call this place “Endurance Memorial site”.

Beyond all names that are attributed to it,  Point Wild on Elephant Island, hosts the bust of  Luis Antonio Pardo Villalòn, the Chilean Navy Officer who, in August 30th 1916, commanded the steam Tug Yelcho to rescue the 22 stranded crewmen of Sir Ernast Shackleton’s expedition who survived the wreck of the ship Endurance living for four and one half months in this island.

As a matter of fact, most cruises stopping at Point Wild , an epic place where part of the Shackleton’s expedition members camped waiting for a rescue. It’s not easy to set foot at Elephant Island where in spite of beautiful landscape, the very rugged coastline and  frequent extreme weather makes landings difficult.

As second-in-command of the Imperial Trans-Antarctic Expedition, Frank Wild was left in charge of twenty-one men on desolate Elephant Island as Shackleton and a crew of five, made their epic rescue mission to South Georgia aboard a lifeboat. From 24 April to 30 August 1916 Wild and his crew waited on Elephant Island, surviving on a diet of seal, penguin and 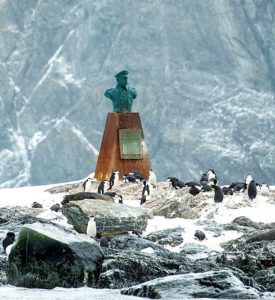 seaweed untill they were finally rescued by Shackleton aboard the Chilean ship Yelcho.

Point Wild (61°03′ South 54°50′ West) is though named after Frank Wild  with a monument dedicated to the Chilean captain Luis Pardo who rescued him and his men.

The Bust of Captain Luis Alberto Pardo,  monolith and plaques have been placed on Elephant Island and their replicas on the Chilean bases Capitan Arturo Prat (62°30’South, 59°49’West) WAP CHL-Ø1 and President Eduardo Frei (62°12’South, 62°12′ West) WAP CHL-Ø5. Bronze busts of the pilot Luis Pardo Villalon were placed on the three above-mentioned monoliths during the XXIVth Chilean Antarctic Scientific Expedition in 1987–88
The plaque displays the following words: “Here on August 30th, 1916, the Chilean Navy cutter Yelcho commanded by Pilot Luis Pardo Villalón rescued the 22 men from the Shackleton Expedition who survived the wreck of the Endurance living for four and one half months in this Island”.