Special callsign II6OANT has been received by the Ministry and we are now ready to be  “On Air”. 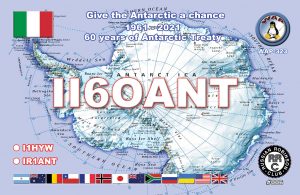 In Italy, according to current regulations,  MISE (Ministry of Economic Development) on which Telecommunications and Ham Radio matters depend, does not issue callsigs with two or more digits, so,  instead of II6ØANT (6 and Ø are two digits), we folded up to II6OANT. WAP Reference issued is WAP-323

II6OANT WAP-323 is a valid station for the 6Ø ATS Awards program.