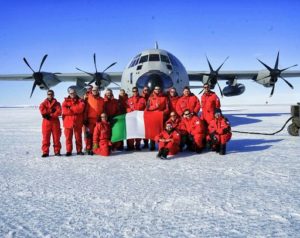 For the first time in 20 years, an Italian Air Force aircraft landed on the frozen pack in Antarctica to support the Italian 2019-2020 research campaign of the National Research Program (PNRA) on the Icy Continent , after the collaboration agreement signed between the Armed Forces and the ENEA (National Agency for New Technologies, Energy and Sustainable Economic Development) to ensure air transport to the XXXV Italian Antarctic Expedition.

A  C-130J military transport aircraft of the 46th Air Force Pisa Air Brigade, landed on the  ice pack with crews trained to operate in extreme climatic and environmental conditions, for example on icy slopes (landing on the pack), was deployed in Antarctica for the transport of  passengers and materials according to the needs represented by ENEA, guaranteeing air connections between Christchurch airport, in New Zealand and Antarctica, both at the Italian Station “Mario Zucchelli” (WAP ITA-Ø1) at  Terra Nova Bay and at the US station of McMurdo (WAP USA-22).

Thanks and credit to the Italian Air Force.

Speaking about the 46th Air Force Pisa Air Brigade, WAP cannot forget the wonderful hospitality, we did receive from the Base Commander and his personnel when, on the year 2009 a group of Antarctic enthusiasts led by IK2IWU Carlo and some friends of Cameri Air Force,  went to visit Pisa Air Force Base and operate from there a special callsign II5AM (WAP-160) in the frame of the 6th Antarctic Activity Week.

We awarded the Base Commanders  with WAP certificates in sign of our long friendship.

We still greatly thanks Gen. Vincenzo Camporini of the Italian Air Force Chief of Staff   who did grant the permission for this amazing experience! 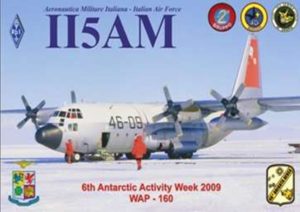