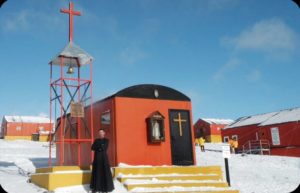 The structure of the chapel is made of steel and is used for Catholic worship by the various Argentine staff members at the station (as well as visitors). The chapel has a bell tower and a cross. In the chapel there is a replica of the Virgin of Luján solemnly moved from her sanctuary in Buenos Aires before its inauguration. 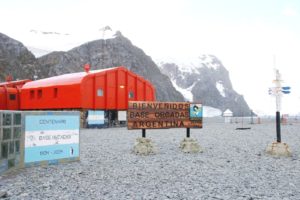 It was blessed and inaugurated on April 15, 1996 by Norberto Eugenio Martina, a military bishop of Argentina, on whom the Argentine Antarctic chaplain depends. Currently the chapel at Orcadas Base (WAP ARG-15) is the southernmost Catholic temple in Argentina, and one of the southernmost on the planet.

The first Holy Mass of the Catholic Church,  celebrated in Antarctica,  was officiated by Jesuit Felipe Lérida on February 20th , 1946 right here in the at  Stella Maris chapel at the  Orcadas del Sud Observatory.  An  8-meter cross was erected and on that occasion, and a communication by telegraph., was set to tsend a message to  the Pope Pio XII in Rome.
More infos about the Argentine Chapels in Antarctica can be seen at:
https://es.aleteia.org/2015/07/31/conoce-las-capillas-catolicas-de-la-antartida/