Pakistan is maintaining a summer research station (Jinnah Antarctic Station) and one weather observatory in the vicinity of Sør Rondane Mountains. Pakistan is also planning to build a full fledged permanent base at Antarctica which will enable the program to start operations in Antarctica throughout the year.

The Jinnah Antarctic Station(JAS) is located 70°24′00″South,.  25°45′00″East  in the vicinity of the Sør Rondane Mountains, Queen Maud Land, in Eastern Antarctica. Jinnah is a scientific 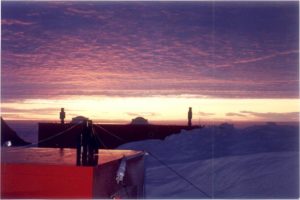 research station operated by the Pakistan Antarctic Program; facilities were quickly established in the region. The station houses an unmanned automatic Weather Station, from which data are transmitted to Pakistan via Argos Satellite System In 2001, the Badr-B was connected to the Weather Station after it was launched by SUPARCO. In 2006, Pakistan established the National Institute of Oceanography’s Polar Research Cell (PRC).

Last Sept. 2017, WAP did try to contact National Institute of Oceanography’s Polar Research  (niopk.gov.pk@gmail.com) in order to get some more recent details and pictures from them. So far nothing has been received and the information are just those available on the web.