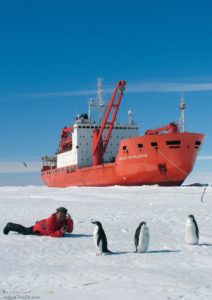 Oceanographic research ship Akademik Fedorov (or Fyodorov ) is one of the Russian icebreaker ships, a diesel-electric research vessel (RV) and the flagship of the Russian scientific polar research fleet. The ship was built for the USSR (Soviet Union) and started operations in October 1987.

This ship is named after the polar explorer Evgeny Fyodorov, who worked on the North Pole-1 station – the first Russian drifting ice research station.

Oleg Neruchev, UA3HK is onboard the R/V Akademik Fyodorov as UA3HK/MM sailing from Cape Town to the Antarctic Station Molodezhnaya (WAP RUS-Ø8).

Last  position of the icebreaker reported at 2017-Dec-21 18:00 UTC by http://www.sailwx.info/shiptrack/shipposition.phtml?call=UCKZ showed the ship position at S 66°24′ E 075°18′. Now the vessel should be anchored in the pack ice in front of Molodezhnaya Station, where Nikolai, RW6ACM will be active from till February 2018 as RI1ANA

No activity reported so far by UA3HK/MM who will be a “new one” for WAP-WACA.
To everyone, good hunting!