John Landrigan KA4RXP/MM, departed the port city of Bluff, New Zealand on February 9, 2018 aboard the Soviet registered expeditionary vessel Professor Khromov also known as the M/V Spirit of Enderby. During the set up prior to sailing I met 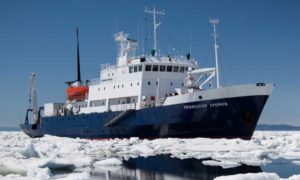 Viktor, the ship’s Communications Officer and Ivan, the ship’s electrician. Their assistance was crucial to what success I was to enjoy.

The night of departure contact was made with JI1TIF in Tokyo and then VK4XXL in New South Wales. The power was at 100 watts from the Yaesu 897. Later that evening a 12 volt 25 amp power supply for the backup Icom transceiver was pressed into service to consolidate the auto-tuner power supply, the SCS Pactor modem supply and the Rigblaster Blue supply into one source. The power supply had been tested in Memphis but I forgot to switch it to 240 volt input. It promptly made a loud cracking noise. Shortly after that an attempt to email everyone resulted in another catastrophe. The SPE amplifier was switched in on low output and during a prolonged session of connecting with fairly constant repeating, a failure occurred in the auto tuner. The transmitter then interfered with a guard channel on a radio on the bridge radio and everything had to be shut down.

Inspection of the auto tuner revealed one severely burned relay and probably another burned relay next it. Multiple power supply combinations had been required at the dock to get the tuner operational and there may have been a surge voltage during that particular Winlink transmission that may have led to such a violent RF arcing and distortion of one of the relay housings. 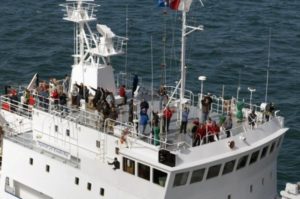 The next day, Viktor and Ivan assisted me in pulling the tuner and inspecting it. The concern of the Captain was such that we had to provide him with complete assurance that he would not be aware that I was operating the radio. The decision was made to forgo the amplifier and instead try to use it’s built in tuner to produce a matched input to the Pacific Aerials 7.3 meter vertical. A match could not be achieved. I used the ship’s commercial internet service to notify the group of my predicament and then relegated myself to being a tourist only.

The next day Ivan brought back the power supply that he had repaired. I don’t how or what he did but Richard, this guy needs to be hired by you. Viktor helped trace through possible surviving tuner circuits and felt I could use 7 MHz and 10 MHz. Transmitting at only a 100 watts, caused no further interference.

We did a Zodiac boat tour around Snares Island, made a landing at Enderby Island in the Aucklands Group and made two landings at Macquarie Island. All the Australian philatelic items were postmarked there and are being held for mailing from there in late March.

Rough seas caused us to skip a landing at Cape Adare. We then proceeded to McMurdo Sound and found a previously cut channel by the ice breaker Polar Star had completely re-frozen and blocked us some 12 miles out from McMurdo. Re-tracking, we went to Cape Evans and landed at Scott’s Hut. I brought all the New Zealand Dependency philatelic items with me and will sign and date them for that landing. I will have them postmarked at the Ross Island Dependencies window at the Main Post Office in Christchurch once we return. The Italian Base had previously closed due to heavy ice.

I reinstalled the tuner and it seems to manage without incident on 40 and 30 meters. Reception is very spotty and I have not been able to make any contacts. On February 23 and 24 I heard K7GI in Tuscon and K6MYX in San Diego booming in at S9++. Craig was fighting S9 noise levels on his end and none of the Australian or New Zealand Stations were hearing me from my grid square RB32. Also heard K7UI.

Hope continues ever onward that perhaps this will make it via Winlink prior to us reaching Christchurch.

We should traverse the remaining 500 nautical miles to reach Campbell Island during the day of March 3, Seas are very rough and biggest roll so far is 27 degrees. 55 degrees is when you really start to pray.

I am looking forward to the International DX Contest on Saturday and Sunday.