Thanks to Jim Reisert AD1C  and  Alan Jubb 5B4AHJ for their continuous research and help, WAP has just issued a new Reference to the US Ellsworth Mountains Camp referred to the activity of KC4USW.

First of all, Ellsworth Mountains Camp (WAP USA-NEW) has not to be confused with Ellsworth Station (WAP USA-31) and Ellsworth Base (WAP ARG-14)

KC4USW was QRV from McMurdo Station, Ross Island (WAP USA-22), in 1957  before moving to Ellsworth Mountains Camp, from where he was QRV until February 1959. CQ May 1959 gives the last day of operation from Ellsworth Station as 1959,Febr.1st  (letter from W8LIO). 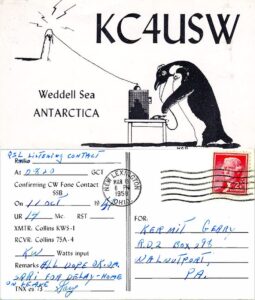 MARIST Archives & Special Collections has available a recording of an interview with Antarctic explorer Captain Finn Ronne from amateur radio station KC4USW, Weddel Sea, Antarctica, dated 1957, Nov.11.
For sure,  QSL of that date (pic on the Left) is a genuine one for Ellsworth Mountains Camp at 79°07’00” South,  85°39’00” West, on Ellswort Mountains, Weddell Sea area (The Weddell Sea is part of the Southern Ocean and contains the Weddell Gyre. Its land boundaries are defined by the bay formed from the coasts of Coats Land and the Antarctic Peninsula. The easternmost point is Cape Norway at Princess Martha Coast, Queen Maud Land. To the east of Cape Norway is the King Haakon VII Sea. Much of the southern part of the sea is covered by a permanent, massive Ice Shelf field, the Filchner Ronne Ice Shelf).

A bit of history 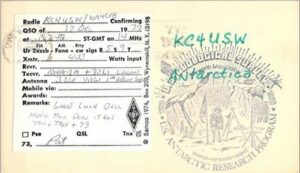 (Ellsworth Mountains Camp mistakenly called Ellsworth Station) was built by US Navy Seabees under the command of Capt. Finn Ronne with the support of the Icebreackers USS Staten Island and USS Wyandot.

The originally planned site for the station was Cape Adams, but when the terrain proved impractical due to huge ice cliffs, an alternate location on Gould Bay was selected, on the western coast of the Wededell Sea over the Filchner Ice Shelf, and close to the Argentinean Belgrano I Base (WAP ARG-Ø5).

Part of the scheduled agenda for the IGY, Ellsworth Station was commissioned on 11 February 1957 and less than two years later, on 17 January 1959, was handed over to the Argentinean Antarctic Institute. Along with the handover, the United States government gave all the buildings, facilities, and existing food supplies while Argentina provided the logistical and administrative services necessary for the continued operation of the station. It was agreed that scientists of both countries would work together at the place in technical studies and scientific research. 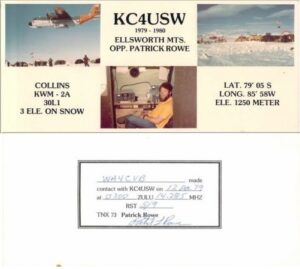 Feasibility of the station came into question when structural problems caused by the unstable ice had the base half-sunken during most of the spring. To protect personnel and equipment, Ellsworth Mountains Camp (mistakenly called Ellsworth Base) was closed and all of its staff and equipment were evacuated on 30 December 1962, during the 1962–63 Antarctic summer campaign. It continued to be inspected periodically by Argentinean exploration teams: it was eventually covered by snow and ice. The Filchner Shelf sector where it was located as split off a giant iceberg, and then it drifted through the Southern Ocean, where the base’s remains have been lost at sea.

TNX Jim AD1C and Alan 5B4AHJ.  Note and info on KC4USW have been updated the in Club Log  at: https://clublog.org/test.php?call=KC4USW