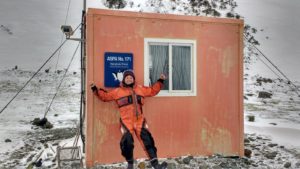 Barton Refuge is a Hut of 3 by 3 mts with gas stove, food, water, dry clothing and dry boots. Located little East of Narebsky point at 62° 14’ 18” South, 58° 45’ 20” West, this Korean outfits is used as emergency shelter  and for scientific purpose. Korea’s King Sejong Station  (WAP KOR-Ø1) lies 2 km to the North-East.

Narębski Point is a headland  on the South-East coast of the Barton Peninsula, at the South-Western end of King George Island, in the South Shetlands of Antarctica  with an average elevation of 0 feet above sea 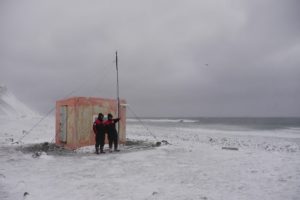 Barton Refuge is the unique facility in the area of ASPA N° 171; over there, camping is prohibited except in an emergency, but if necessary, the use of the Refuge facility located on the shore near the Eastern boundary of the Area is strongly encouraged.