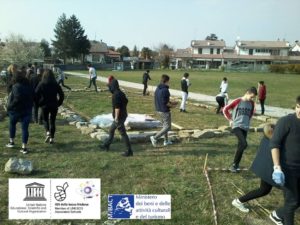 Students of the “Malignani Institute” reconstruct  the basement perimeter of the Italian scientific outpost built in Antarctica in 1976 by the Cepparo’s Expedition. It’s called MAVI  (Memoriale dell’Antartide “Valle Italia”, Cepparo-Bove) and it’s a Memorial to not forget . The Ministry of Cultural Heritage (MiBACT) is one of the sponsors of this “National Antarctic Memorial, Renato Cepparo”

Saturday 24 February 2018, at the “Malignani School 2000” an informal ceremony of the laying of the foundation stone for the reconstruction of the first Italian scientific base in Antarctica has begun: the Tricolor flag is still waving from the “New Giacomo Bove Camp” and the “National Antarctica Memorial, Renato Cepparo” at Cervignano (UD) is growing up; thanks to Alpini corp, Italian Navy, Civil Protection and to all participants who works among the students as well reported on a local newspaper.

Today, the reconstruction of the Giacomo Bove Base Camp foundations, is completed and the Memorial will soon be inaugurated 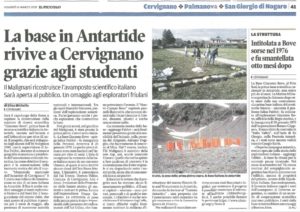 President of Adri-Antartica,  Prof. Julius Fabbri, Ph.D. with the Cultural  Association “ Adri-Antartica”  in collaboration with the Municipality of Cervignano del Friuli (UD) and the School “Malignani 2000” member of the UNESCO network are pleased to announce the inauguration ceremony of the Antarctica “Valle Italia” (MANI), Cepparo-Bove, on Friday 25 May 2018 at the headquarters of the “A.Malignani” Technical Institute in Ramazzotti street , 41 – Cervignano del Friuli (Udine). The event falls into the National Competition  of the MIUR “Future Present”, in agreement with UNESCO Youth – second edition –school year 2017/18