Last minute info:
We have just received some information fom Danilo IAØ/IZ1KHY, who is actually in company with David FT4YM/P at “Dome C” Summer Camp.

We must reconsider the provisional WAP reference of Little Dome C,  just issuded, as “Dome C” Summer camp and “Little Dome C” , are two different sites: Danilo promised to send us  abit of description and pictures so that we can update WAP-WADA directory according to the most clear situation know. 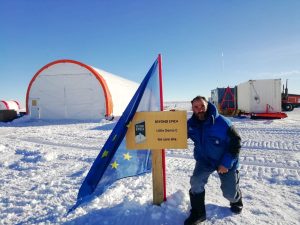 The European Project for Ice Coring in Antarctica (EPICA) was set out to provide the longest ice-core climate record yet, by drilling a core from 3,270 m thick ice at a site known as “Little Dome C” in East Antarctica.
Pic on the left show David Brunet at Little Dome C

On this site, David Brunet F4FKT, has been active the first time on Jan. 6th 2022 as FT4YM/p after having been QRV in the past weeks from Dome C Summer Camp (WAP MNB-NEW) near Concordia Station (WAP MNB-Ø3)

At the light of this great and not easy activation (David is using a dipole and 100W), a brand new WAP reference number will be given as soom as we have more details about the site , 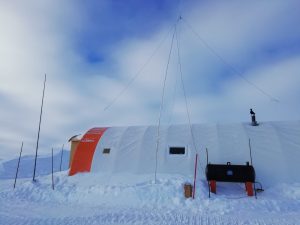 To be honest, we have to thank immensely  our friend Mehdi F5PFP for his great job to organize skeds with David and allow us to load a New Antarctic site on our log. Our congrats to David for his patience and determination in being  on the air  according to regular skeds!
Pic aside show the dipole used by David at Dome C Summer camp

A bit of information about Little Dome C:

The first ice core drilling campaign of Beyond Epica-Oldest Ice is starting in Antarctica at the Little Dome C site. The aim of the project is to go back to 1.5 million years in time, by sampling and analysing the deep ice, which will reveal invaluable information on temperature and on the concentration of greenhouse gases in the past atmosphere. This project represents an unprecedented effort in paleoclimatology.

The project, is funded by the European Commission with 11 million euros and involves twelve European and non-European international research institutes and will benefit from synergies with the activities at the Italian-French Concordia Station managed by the French Polar Institute Paul-Émile Victor (IPEV) and the Italian National Antarctic Programme (PNRA) activities, including ENEA in charge for the logistics.

Whatch the Beyond EPICA official teaser

The actual campaign, at Little Dome C will last until January 2022, on an area of 10 km2, at  40 km from the Italian-French Concordia Station, on the East Antarctic plateau,  one of the most extreme places on the Earth.

QSL for FT4YM/p have to be requested direct to F5PFP