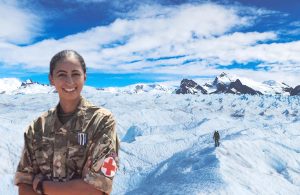 Chandi began her expedition on November 7, 2021, flying to Chile and then embarking from Antarctica’s Hercules Inlet. Along the way, she hauled a sled weighing 90 kilograms (nearly 200 pounds) holding kit, fuel and food to last for roughly 45 days.

Chandi, who adopted the nickname “Polar Preet” for her blog and fundraising efforts, spent two and a half years preparing for the grueling expedition.

She underwent crevasse training in the French Alps, trekked across Iceland’s Langjökull Glacier and endured 27 days on the ice cap in Greenland — not to mention the months she spent dragging a heavy tire behind her back home in England, to simulate pulling a sled.