During the long winter, no supplies or people can be flown in and the high altitude causes the crew to experience chronic hypobaric hypoxia or lack of oxygen in the brain. 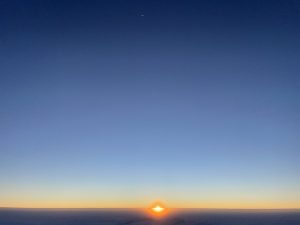 After months of preparation, a crew of 12 scientists, explorers, and staff at Europe’s Concordia Research Station in Antarctica (WAP MNB-Ø3) are braced for long winter nights as Antarctica goes dark for four months. The Antarctic night and the winter will be a goldmine for research as the European Space Agency (ESA) commences living and working in isolation for six months on the frigid continent.

The penultimate sunset at Concordia research station marked the beginning of the long night, where no sunlight will be seen on the continent as it submerges in complete darkness. ESA said that medical doctor Hannes Hagson and his crew are ready, “finally embarking on their ‘real’ mission in Antarctica: living and working in isolation for six months in the name of spaceflight research.”
While the world experiences four major seasons, Antarctica has just two, summers and winters as it remains covered in thick ice. The region has six months of daylight in its summer and six months of darkness in its winter.

The Italian-French outpost Concordia is located 3233 m above sea level where temperatures can drop to –80°C in the complete frozen darkness outside.  This image above, was taken by Hannes Hagson on 3 May. The last full sunset took place the day after but appeared only as a thin sliver in the sky.

For this reason, Hannes is facilitating biomedical experiments on himself and his crewmates to understand how humans cope with living in extreme isolation. From sleep studies to gut health measurements to mindful practices, the crew are poked and prodded to help researchers understand and overcome the challenges extreme environments, like space, pose to present and future explorers.

Follow Hannes during his winter-over on the Chronicles from Concordia blog.