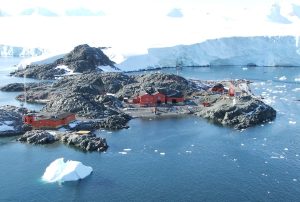 Carlos Almirón (LU7DSY) informs that Claudio Daniel Karner LU3DCK, actually on board of I/B Almirante Irizar will plan to operate from Friday 15 april,   to monday 18 april 2022,  at the Argentine Base Gen. San Martin, WAP ARG-Ø8.

Here the message from Carlos LU7DSY:
From friday to Monday, Antarctic Base General San Martín  (LU1ZD)  will be on the air operated by Claudio Karner LU3DCK, one of the crew members of the ARA Icebreaker “Almirante Irizar” that will make a 4 day stop at the base.

The icebreaker ARA “Almirante Irizar”, which is sailing in the Antarctic Continent, plans to anchor in the next few hours in front of  San Martin Base. From there, by helicopter and landing craft, the personnel will go to the base facilities.

Argentine Base San Martin  is located on Barry Islet (68º 07′ South, 67º 08′ West), in the heart of the Antarctic Peninsula.  Barry Islet (Sanaviron Cove, Mottet Pass) is part of the Debenham Islets (Margarita Bay, Fallieres Coast), located near the Bellinhaussen Sea. Operation will last until Monday 18 inclusive.