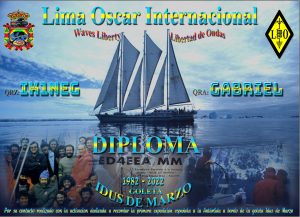 This year, 2022,  marks  the 40th Anniversary of the first Spanish expedition to Antarctica, carried out aboard the schooner “Idus de Marzo”, organized with the aim of ensuring that Spain meets the requirements for joining the Antarctic Treaty as a full member.

Over more than 10,000 miles, the schooner –which officially left the port of Candás (Asturias) on December 15, 1982–  did  travel through the islands of the Antarctic Peninsula, visiting its Scientific Bases, ending its journey in Punta Arenas (Chile), on March 29, 1983, although the “Idus de March” did not touch Cadiz, Spanish, until June 8, 1983.

Just one contact with EA1FDD is sufficient to get the Commemorative Award (See pic above), which has to be requested through qsl@limaoscar.com .   This diploma, which reflects the first mobile maritime QSL in its background, aims to be a memory of those who made the journey possible.

The Ides de Marzo  is a schooner that carried the first Spanish scientific expedition to the Antarctic Continent. On December 14, 1982, the schooner departed from the port of Candàs,Asturias, initially with a crew of eight members at the head of which was Captain Javier Babé and Santiago Cañedo, who had the presence of a journalist and two biologists. After stops in Vigo, Las Palmas and Tenerife, from where they sailed south.

On February 20, Ides de Marzo  arrived in Punta Arenas, a port where eight other expeditionaries embarked. After stocking up the schooner left for Puerto Williams in Tierra del Fuego,  then passed through Cape Horn and Drake Passage, arriving on March 4 at the South Shetland Islands in Antarctica. The schooner toured other places on the continent such as Deception Island, Yankee Bay, Foster Bay, visiting several Polar Bases.

The expedition also suffered the meteorological rigors that were expected in an area with a climate as harsh as the Antarctic, having to face winds of great intensity and vague sea, after traveling more than 17,000 miles, touched land in the port of Cadiz on June 9, 1983.