According to NCPOR the 38th Indian Antarctic Research Expedition  will use the Icebreaker  “Vasiliy Golovnin” for supply the Indian Scientific Bases in the Icy Continent.  FESCO Transportation Group signed a contract with the National Centre for Polar and Ocean Research (NCPOR, Ministry of Earth Sciences, Government of India) for 2019 Antarctic Season.

By the terms of the contract, FESCO icebreaker ship “Vasiliy Golovnin” is to deliver general cargo, food products, fuel to the Indian Antarctic stations Bharati and Maitri. NCPOR 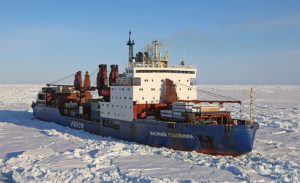 scientists are joining  to this expedition aboard FESCO vessel. The ship  did start its Antarctic voyage, under the command of Captain Iksan Yusupov, at the port of Cape Town last  January 26th  with members of  the 38th IAE led by Dr Shailendra Saini.

The involvement of  M/V Vasiliy Golovnin in Antarctica  will last for three months.

Few days ago the icebreaker did reach  Bharati Station (WAP IND-Ø4). As far as WAP know, there aren’t  Ham radio operators among the Indian Team this year!

India’s scientists and personnel did celebrate the 2019’s Republic Day at Maitri (WAP IND-Ø3) last Jan. 27 and on at Bharati Station (WAP IND.Ø4) on last Jan. 28.