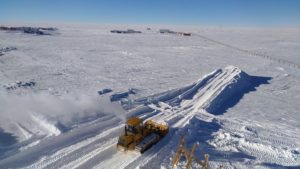 The XXXIV Italian Antarctic Campaign (2018-2019) has just begun  few days ago. Mario Zucchelli Station (WAP ITA-Ø1) has been open and  personnel is working on the outside to rebuild the air strip, waiting for the first airplane and then, the start of the summer campaign. The helicopters make a stop on one of the 3 equipped platforms, the light aircraft equipped with skis land on any flat snow-covered surface, the Hercules C-130 instead (with wheels) on a 3000 meter long seasonal track that is set on sea ice.

The site of the Italian Base, initially called Stazione Baia Terra Nova and now Mario Zucchelli (MZS), is located along the coast of Northern 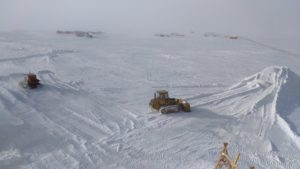 It is built on a small rocky peninsula. The area where the buildings and facilities are located has access to the sea.

Small inlets lend themselves to the loading/unloading of materials according to the season. At the beginning of the summer season, when the surrounding sea is covered by ice, the ship unloads the materials on the ice pack and then, by means of convoys of sleds everything is moved to the base. At the end of the summer, when the ice gives way to water, a small pier and a barge are used for connections between land and ship.

So far, we don’t know if, among the personnel involved in this 34th Antarctic Campaign, there is some Radio operators who can work HF on the Ham radio bands.