An agreement was originally signed on December 1, 1959, in Washington by the 12 nations that were active in Antarctic science at the time.
The Treaty came into force on June 23, 1961. It has since been acceded to by many other nations, and there are now 54 Parties to the Treaty. 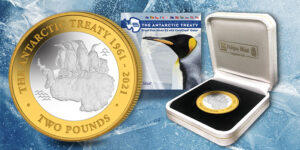 The entry into force of the Antarctic Treaty is recognized as one of the most successful international agreements, setting an example of peaceful cooperation,  designated as a “natural reserve, devoted to peace and science”.

Now, the Pobjoy Mint is delighted to announce the release of a beautiful new £2 coin on behalf of the British Antarctic Territory to commemorate this anniversary.

The coin is offered on behalf of the Government of the British Antarctic Territory, with full recognition of Article IV of the Antarctic Treaty.