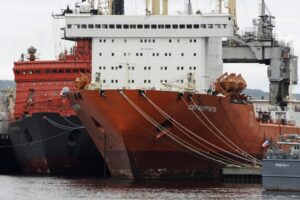 Later this year, the “Sevmorput” is due to sail to Antarctica with a shipment of construction material for this brand new Base which will be called Vostok II Station

Rosatom, Russia’s state nuclear corporation, informs in a Facebook update that the «Sevmorput» later this year will sail across the globe with construction materials aimed for the country’s Vostok II Research Station in inland Antarctica.

Founded by the Soviet Union in 1957, the old Vostok station (WAP RUS-13) is the place on earth with the lowest ever reliably measured temperature with −89.2 °C. The station is 1,253 km from the South Pole. The «Sevmorput» will deliver the cargo on the coast from where it will be transported into the frozen continent.

Thanks and credit to: https://thebarentsobserver.com/en/industry-and-energy/2020/02/nuclear-powered-container-ship-sevmorput-gears-antarctica-voyage

It will be great to have a chance to contact  I/B Sevmorput on HF bands,  during his way down to Antarctica. The ship will enter on WAP WADA Directory if it will be put on the air. Russian radio amateurs did never disappoint us. They know how to operate professionally at any latitude and with even modest means . The world of radio amateurs trusts in them, hoping they can operate HF  on board!