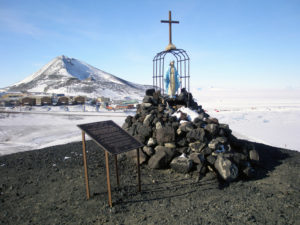 The Our Lady of the Snows shrine is one of the many memorials atop hills along McMurdo Sound to men who lost their lives in Antarctica; this one is farther up the trail from Hut Point. The Shrine is dedicated to Richard T. Williams, US Navy – Seabees, who lost his life at McMurdo Sound on January 6, 1956 during initial construction of McMurdo Station.

Seabee Construction Driver third class, USN, Richard T. Williams died when the D-8 bulldozer he was driving, broke through the ice and sank; his body was never recovered.

He was hauling cargo along a track from the ice edge east toward Cape Evans, when his tractor crashed through the ice into 100 fathoms of water about two miles west of Cape Royds. Plans at the time called for a land airstrip to be built between Cape Evans and Cape Royds to support future exploration and the construction of South Pole Station. Heavy ice prevented the convoy from getting close to Ross Island, prompting the need for a long and hazardous traverse. (Immediately after the accident, this project was abandoned, and aircraft facilities were developed on the ice at what would become the Williams Air Operating Facility).

The following year the Our Lady of the Snows Shrine was erected on Hut Point in memory of Williams. At the original dedication on 6 January 1957; chaplain Father Condit is playing the organ, which had been carried up the hill to the site. During the ceremony, David Grisez, a friend of Williams, played “Taps”. The monument has been repaired and restored more than once…most recently in 1995-96 the statue was refurbished and repainted by Carmelite nuns in Christchurch. It was returned during that season, along with a new plaque furnished by the CEC/Seabee Historical

For many years the statue had faced McMurdo Station, but after the rededication she was turned around to face north out over McMurdo Sound toward where Williams was lost.

Thanks and credit to: https://www.southpolestation.com/trivia/igy/willy.html