Now the news is official: Icebreaker “Laura Bassi”, former “Ernest Shackleton” of the British Antarctic Survey, is the new OGS ship that will work for PNRA to replace the glorious Italica!
A great result for the whole Italian scientific community, and in particular for the one that studies the poles. The National Institute of Oceanography and Experimental Geophysics – OGS, thanks to a funding received from the Ministry of Education, University and Research (MIUR), has purchased the icebreaker “Ernest Shackleton” of the Norwegian Rieber Shipping already used by the British Antarctic Survey.

Laura Bassi, formerly Polar Queen and RRS Ernest Shackleton, is an icebreaking research vessel,  primarily a logistics ship used for the resupply of scientific stations in the Antarctic.

The Icebreaker ship, is named in honor of the Italian scientist Laura Maria Caterina Bassi Veratti who, in 1700 became the first woman, Italian physicist and academic.She was the second woman graduate of Italy after the Venetian Elena Lucrezia Cornaro, the first to pursue an academic and scientific career and the first in the world to obtain a university chair. The N/R Laura Bassi now becomes the only Italian oceanographic research vessel capable of operating in polar seas, both in Antarctica and in the Arctic. 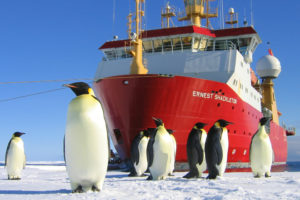 Launched in 1995 as MV Polar Queen for GC Rieber Shipping, she was operated in the Antarctic by other national programs. The British Antarctic Survey acquired her on a long-term bareboat charter in August 1999 and renamed her RRS Ernest Shackleton after the Anglo-Irish polar explorer Sir Ernest Shackleton. She replaced RSS Bransfield.
Icebreaker ‘Ernest Shackleton’ will return to Antarctic waters one day as ‘Laura Bassi’.

BAS (British Antarctic Survey) did say goodbye to their former workhorse which will now be operated by the Italian National Oceanographic Institute OGS.
BAS is preparing for arrival of RRS Sir David Attenborough