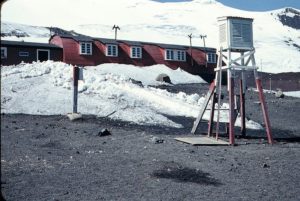 In 1955 Chile inaugurated its station Pedro Aguirre Cerda at Pendulum Cove (62°56 South, 60°36 West), to increase the Chilean presence in the sector claimed by that nation.

When the US Coast Guard icebreaker Eastwind visited Deception Island in 1963/64, the British and Chilean scientific stations were active. The Chileans had an airstrip, with a DeHavilland Beaver supplying their base from Punta Arenas. 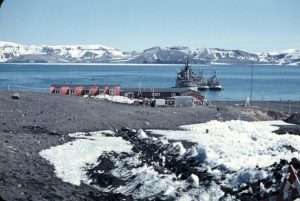 In 1969, a violent volcanic eruption demolished the Chilean stations Pedro Aguirre Cerda and Gutierrez Vargas Refuge. Remains at Whalers Bay include rusting boilers and tanks, an aircraft hangar and the British scientific station house (Biscoe House), with the middle torn out by the 1969 mudflows. A bright orange derelict airplane fuselage was removed in 2004. Deception Island has become a popular tourist stop in Antarctica because of its several colonies of chinstrap penguins, as well as the novel possibility of making a warm bath by digging into the sands of the beach.

Last activity from this rare Old site in Antarctica (WAP CHL-Ø4) was made by F5PFP operating as CE9XX  on March 2011.