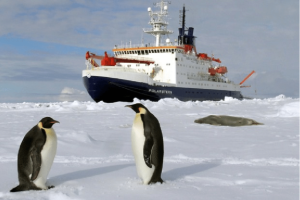 Few days ago the German Research Ship Polarstern set off  from Bremerhaven for Antarctica.  DPØPOL/MM (WAP-317) has already been reported on 40 mts CW.

On Sunday evening, the “Polarstern” was at the height of Portugal in the Atlantic and set course for the Canary Islands. From there it continues south through the Atlantic to Cape Town. The next stage then leads to research projects in the Weddell Sea and adjacent waters. The current position of the “Polarstern”  can be found on a daily updated map.

The German Antarctic Station Neumayer III (WAP DEU-Ø8) , will not be reached  by the “Polarstern” until March 23, 2022. This is why the Greenland container ship “Malik Arctica” will take over supplying the German research base on the Ekström Ice Shelf this season. The new antenna system for the QO-100 ground station on Neumayer III is also on board. According to current plans, the “Malik Arctica” will reach Neumayer III on December 21; the position of the ship can also be found on a map (slide section down).

The new wintering Team and technical staff for maintenance work during the current summer season, will travel by plane via Cape Town with a stopover at the Wolf’s Fang Air Field (WAP MNB-12)  to the Neumayer III research station. From Wolf’s Fang, Oleg, ZS7ANF , should show up on air  soon .

He has also announced the special call sign RI60ANT (WAP-335)  to commemorate “6Ø years of the Antarctic Treaty”.