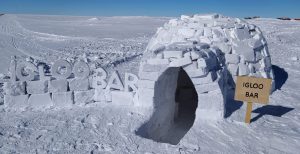 Thanks  to the collaboration of many volunteers, including our friend Danilo Collino IZ1KHY, the first Igloo Bar of the Antarctic Plateau,  has been created  at Concordia Station (WAP-MNB-Ø3).

Using a chainsaw, Danilo did cut the ice into blocks, which he then arrange likewise a eskimo technique and, layer by layer he completed the construction! The interior was large enough to accomodate over 6 people. At the opening party, there were 12 people inside to drink, so quite a large space!
The entrance recalls remotely the project launched by WAP,  to build a chapel at the Italian Base MZS (see … http://www.waponline.it/church-in-antarctica/) 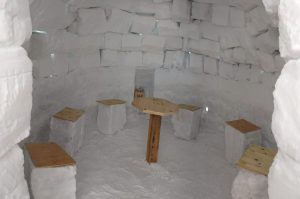 This  Igloo Bar just built, remind us  another great “ice sculpture” made at Concordia Station by Daniele Karlicek an italian researcher. It was the Church of Daniele’s town, Muggia near Trieste in North West Italy. (See the video at the bottom of this page).

About his staying at Concordia, Daniele wrote: Beautiful initiative, the one of building a Church in Antarctica! I did it myself, by reproducing with ice, the Dome Church of my town (Muggia, in the Province of Trieste) at Base Concordia “Dome C” during my overwintering stay on last 2010-2011 Antartic Campaign.
Daniele Kalicek is a young Italian Researcher; he works for the Department of Geosciences at the University of Trieste, specifically in the laboratory of isotopic Geochemistry. 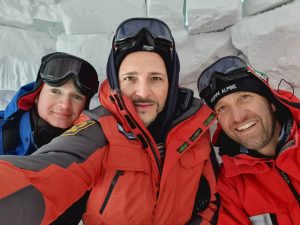 Well,  going back to the “Igloo Bar”, the pics posted on the web have won everyone’s acclaim. WAP is proud to share some of them with our readers and followers with the compliments for all those involved … architects of the ice!

Talking about Radio, the tests made in recent days show that our signals arrive discreetely in Concordia while on the contrary, signals from Concordia are very low, at the limit of comprehensibility. According to his last message, Danilo is expected to try again HF (20 mts SSB)  from Concordia Station over the course of this week so, four more days. Check around 15,30-16,00 UTC 14140 +/-

Lt. Danilo Collino,  IZ1KHY is an expert Mountain Scout of the Italian Army at his  third mission in Antarctica .

Many thanks to Daniele Kalicek for the the video below