Several traverses (aka Russian Antarctic Convoy) have been made in the recent past time by Russian Teams, especially in the East Antarctic. 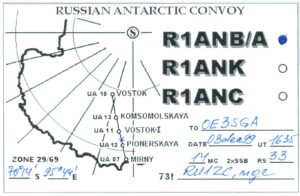 Often, studies were carried out on the scientific traverse as for example the 1978–1984 Mirny–Komsomolskaya–Ridge B, Denman Glacier and Dome Concordia, or the 1999-2000  Mirny-Vostok traverse with intermediate stops at Pionerskaya (WAP RUS-1Ø), and Konsomolskaya (WAP RUS-Ø5) as well as the so called Vostok I (WAP RUS-14) and more specifically the stopping sites on the way to the North and South of Vostok I Base as  reported on several QSL cards. 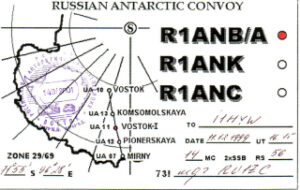 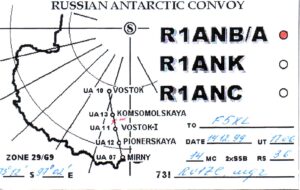 Ground based radio-echo sounding (RES) were carried out in the area of subglacial Lake Vostok during the last five years by Polar Marine Geological Research Expedition in the framework of Russian Antarctic Expedition (RAE). These investigations goal to collect information about the geomorphology of the lake bottom and surrounding slopes providing some understanding of the geomorphologic features in this area of East 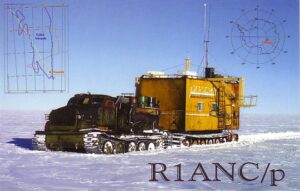 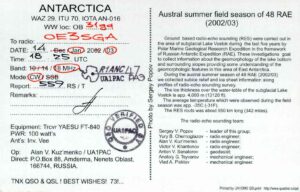 During the austral summer season of 48 RAE (2002/03) we collected sub-ice relief and ice sheet information along profiles of radio-echo sounding survey. The ice thickness over the water-table of the subglacial Lake Vostok is app. 4,000 m (13120 ft). The average temperature which’ were observed during the field season was app. -35C (-31F). The RES routs was about 550 km long (342 miles).

The radio-echo sounding team was composed by:

Some addition about RES:
Since 1995, Polar Marine Geological Research Expedition has performed the geophysical investigations of Lake Vostok, Central East Antarctica. The study of this phenomenon is carried out by means of radio-echo sounding (RES) and reflection seismic. In total, 3250 km of RES profiles and 194 seismic measurements have been made. The motivation for resuming the Russian scientific traverses was the discovery of Lake Vostok in the 1990s. Because the location of Lake Vostok is very close to Vostok Station it opened widespread possibilities.

Ground-based RES and reflection seismic soundings were finished in 2008 with a total of 5190 km of RES profiles and 318 reflection seismic measurements were carried out Besides, allowing for better understanding of the Earth’s crustal structure, passive seismic investigations have also been carried out on the profile across the Lake Vostok near Vostok Station

Read more about RES at: https://www.researchgate.net/publication/339273179_Fifty-five_years_of_Russian_radio-echo_sounding_investigations_in_Antarctica/fulltext/5e46f5cfa6fdccd965a5ca8c/Fifty-five-years-of-Russian-radio-echo-sounding-investigations-in-Antarctica.pdf?origin=publication_detail