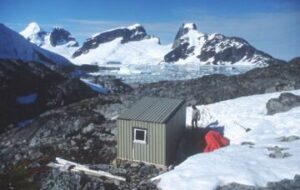 Also known as Rasmussen Point, this Hut is located at 65°15’South,  64°06’West on Rasmussen Island in the North part of Waddington Bay, Graham Coast in Antarctica.

Building did start 29 Mar 1984, completed early 1985 and occasionally used from Mar 1984 through 6 Feb 1996. Now the Hut is used as emergency refuge and recreational shelter.

Rasmussen Hut is occasionally used by Ukrainian personnel from Vernadsky Station (WAP UKR-Ø1) a Ukrainian Antarctic Station located at Marina Point on Galindez Island of Argentine Islands, not far from Kiev Peninsula. Vernadsky Research Base is situated 8 km west of Rasmussen Island.
WAP does not have evidence of Ham Radio activity from this site which is listed on WAP-WADA Directory as GBR-NEW